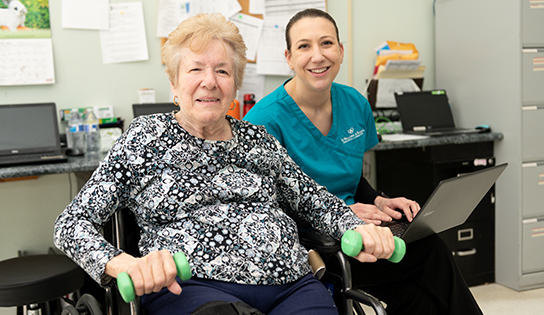 In September of this year Frank had a motor vehicle accident causing multiple fractures. During his recovery he had issues with ongoing vomiting followed by lactate elevation and Pneumonia. Frank was admitted to The Willows at Ramapo after being in Good Samaritan Hospital. Fred entered The Willows with a diagnosis of Pneumonia. He was also diagnosed with recent rib fractures, COPD, gout, muscular de-conditioning, and glaucoma.
Upon Frank’s arrival to The Willows, he was greeted by our concierge and welcomed to the facility. He was then evaluated by the dietary team. The team discussed his diet with him and spoke about his likes and dislikes. Frank was then evaluated by his physical, occupational, and respiratory therapists.

Through the information gathered in his evaluation, a set of plans and goals were made to facilitate a successful return back home with his wife. Due to his pneumonia and his de-conditioning, his endurance and exercise tolerance were extremely compromised. In his initial early sessions, he was able to handle short light exercises and ambulation of 20 or 30 feet before he would become short of breath and needed extended breaks to recover. Fortunately, his oxygen levels during exercises stayed in the high 90’s.

The key focus of Frank’s therapy goals was both energy conservation and pacing. Shortness of breath was a major hurdle during his his beginning sessions. Energy saving techniques like pursed lipped breathing, frequent breaks, and pacing were used to help extend his exercise and ambulation tolerance. An Incentive Spirometer was given to the patient for him to use throughout the day to help promote air movement and control his breathing pattern. Frank really wanted to participate in the many activities that the facility offers. Unfortunately, due to his anemia and frequent IV treatments, Frank found himself fatigued and needed rest after therapy sessions.

As time and the weeks progressed, Frank’s condition stabilized and improved. He was able to walk longer distances with notable decreases in shortness of breath. With his tolerance and strength improving, Frank was able to do more difficult exercises like stairs and extended distances with ambulation. Some setbacks were experienced during his time, mostly due to his Anemia, but he was able to bounce back the next day. After great strides in his condition were reached, discharge plan was made, with a focus was put on strategies for a daily routine that were put into place to help him plan his day from the time he got up until he went to bed.

Another big factor in helping him get better was the constant visit of Frank’s family. Everyday either his wife or daughter came to visit to check on his progress and give him words of encouragement. Also, the concierge made sure to constantly visit him to see if he needed anything. Despite all his hurdles and medical issues, Frank was always pleasant and engaging with staff and fellow patients.

With his discharge from The Willows approaching and his time here coming to an end, Frank had met the goals set by all disciplines. He was set to return back home with the tools, tips, and strategies for a successful and healthy return back home.